Is a woman still a woman without her breasts?
Apparently this case – breast cancer – triggered an affair between Gina (Kim Basinger) and Nick Martinez (Joaquim de Almeida); this affair then made them die in a fiery explosion in a trailer where they usually had dates. The death of these two people who were deeply in love made their kids lose their mother (Gina had 4 children) and father (Nick had 2 children).
If the reason is clear why Gina was involved in an affair with Nick – a married man – the movie doesn’t give clear illustration why Nick did that. Although Gina lost her left breast due to cancer, Nick loved her passionately; always gave her warm sensation and sexual satisfaction every time they dated. This was absolutely very contradictory to Gina’s husband who lost his passion toward his wife. Doesn’t everybody deserve to have and enjoy wonderful lovemaking with someone they love? Someone who has successfully made them accepted and loved just the way they are?
Without Gina and Nick’s knowing, Mariana (Jennifer Lawrence) – Gina’s eldest daughter – knew their affair. She even found out the place where they dated: a trailer located in a very spacious open plain. This made Mariana lose her respect toward her mother. In order to make Gina ‘come back’ to be a loyal wife to her father and a caring mother to the children, Mariana did something to stop the affair between her mother and Nick that accidentally killed them both.
Deeply devastated due to the accident that made the two families hated each other, Mariana surprisingly accepted Santiago’s invitation – one son of Nick – to have a date. Not long after that, Mariana and Santiago (J.D. Pardo) even fell in love with each other and ‘copied’ what their parents did: having a forbidden love affair. When Mariana’s father found out this affair, he would kill Santiago. However, before this happened, Mariana asked Santiago to run away together. They went to Mexico to continue their life.
Mariana gave birth to a daughter that in fact made her very worried if the daughter would grow up to be like her. To avoid that, she even left the two-day baby girl with her dad.
In order to leave her dark past, Mariana changed her name to be Sylvia (Charlize Theron). She lived an economically successful life with her restaurant. Obviously, her beauty charmed many men so she had a lot of one-night-stand dates. She did not want to have one steady boyfriend because she was even worried to be heart-broken. She did not want to walk in her mother’s path either – let’s say by having a long-lasting relationship with John, one employee in the restaurant, who was married.
Despite her success, the dark past kept following her: killing her mother and her boyfriend, breaking her father’s heart by having an affair with Santiago, leaving the family to live together with Santiago until she left her baby. No wonder if once in a while Sylvia looked depressed and wanted to commit suicide.
Meanwhile, in Mexico, Santiago got a very serious accident. Worried that something bad would take his life, Santiago asked his friend, Carlos to look for Mariana in order that Mariana (alias Sylvia) would take care of their only child, Maria.
Could Carlos find Mariana? Would he successfully beg her to come back to Santiago, especially to take care of Maria, the daughter that she left for more than a decade?

Additional note:
It is quite interesting to pay attention to the ‘affair’ between Sylvia (Charlize Theron) and John (John Corbett), her own workmate. John who was married looked so possessive and jealous every time he saw Sylvia intimate with a guy. One time when she was dating one customer of her restaurant, John could not control himself. He embarrassed Sylvia by scolding her, in front of that guy, “Is that what you do? Fuck any guy you wanna fuck? And then just go?”
Sylvia responded, “Don’t mess up with my life, John. You don’t have me! Just overcome your own problem with your wife!”
Nevertheless, when one time Sylvia ‘challenged’ him to run away together, to leave everything they owned at that time, John refused. It proved that John was not different from any other man who dated Sylvia: only to have fun. The difference was if other men didn’t show exaggerating possessive character, John annoyingly did.
GL7 10.30 251111 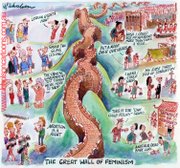